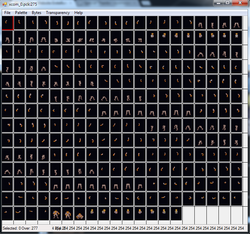 If you've ever used pckview or a similar program to view the sprites for the xcom soldiers, you have seen a lot of body parts, and probably wondered how they fit together. I've made lists... perhaps they help.
Oh, in case you didn't know yet:
xcom_0 is the basic soldiers in their coveralls
xcom_1 is soldiers in personal armor
xcom_2 is soldiers in power suits and flying suits. yes, both in one file. if you've ever played xcom, you'll know why.


also, if you want to play around with designing or modifying weapons and want to see what they will look like with the soldier sprite, I have composed layered .xcf files (GIMP's native format, I like to use Portable GIMP) with all the sprites as layers. There's eight .xcf files per armor type (one file for each facing). They already contain the sprites for the original pistol, rifle and plasma pistol, plus the homemade DaiChi Blade (see below).
"xcom_0" also contains the sprites for chiko's laser pistol, and xcom_2 contains my "new" armor types (see below). 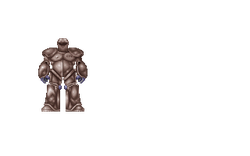 I never liked the look of the original helmet. this is my take at something... less disfigured.


what's that in the soldier's hand? scroll down... 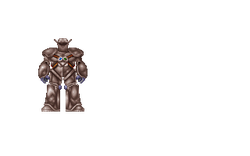 As I said, I don't like the helmet. Also, if the soldier is facing towards the screen, you can't even see if he's wearing power or flying armor. So I took the hint from the original UFOpaedia picture and added what I call Enhanded Aerial Resonance Stabilizers (E.A.R.S.), which of course are necessary for the flying suit to work at all, how did they ever do without? :)

The "mecha"-style wasn't intentional, but I kinda like it now :)

what's that in the soldier's hand? scroll down...

Suggested by Daiky, original image by Chiko, this hand-to-hand weapon was developed in a forum thread. I made the sprites, because I like the idea.

Here's the .bmp pictures in a .zip file. The graphics work in-game, but since the only hand-to-hand weapon there is the stun rod, and that's two-handed, I can't really provide you with a game file to check it out... until I learn how to add completely new weapons, with rulesets and everything.

As suggested by Chiko on the openxcom forum, this is a different line of laser weapons. I like his ideas and the pictures he's posted... so here's his version of the advanced human tech weapons.
The zip file below contains battlescape sprites (in hands and on the floor), inventory sprites and ufopaedia sprites. Remember to backup the original files first:

Again, as suggested by Chiko on the openxcom forum, these are different sprites for the human conventional weapons. This is just new "bigob" files, the images used for the inventory, the battlescape main screen bottom menu, and the UFOpaedia - because the other in-game sprites (handob and floorob) actually look closer to these weapons than to the original ones.
I'll simply provide you with the image files this time. If I would provide another bigob.pck, it would only contain these weapons, not for example the laser weapons... the best way to mix and match what you want is to use bomb bloke's bb_toolkit to make your own game files. I started a "How To"-Section... let me know if you have trouble.