So, Mapview  or Mapview 2, which version should i use?

Mapview has been around for many years, it was started by Daishiva and has had a handful of other coders pick it up over the years to fix minor issues with it.

Mapview 2 is a updated version being worked on my Kevl from the OXC forums - See Link: that comes with a few (in my opinion ) improvements. Mapview 2 does away with the old File Format and uses a similar data structure to the OXC format making it easy for anyone who has started using YAML to pick it up. Also Kevl has been kind enough to build in a few extra features for me since i have returned to OXC ( after a few years being MIA) which make this the best option currently available.

The general advice i give as to which one to use comes down to this, if your a veterans modder, with hundreds of mapblocks already built into Mapview and dont want to re-create all the rulesets again in Mapview2, then stick to Mapview 1, if your a new modder or are happy on doing a little extra setup work, make the switch to Mapview 2.

All the notes shown below will be based upon Mapview 2, however  i will keep the link to my Old Mapview notes here.

Please install Mapview in your desired location ( i like to keep mine in my OXC folder).

Once installed, you will note 3 separate programs come as part of the install process, for this How-To, we just want to open Mapview.

When it opens it will ask for the location of your UFO and/or TFTD files, it needs this so it can setup the default maps for you, follow the prompts and you will a job tree similar to mine one below shown ( Note: screenshot below has a few extra items in the tree, your version wont have these). 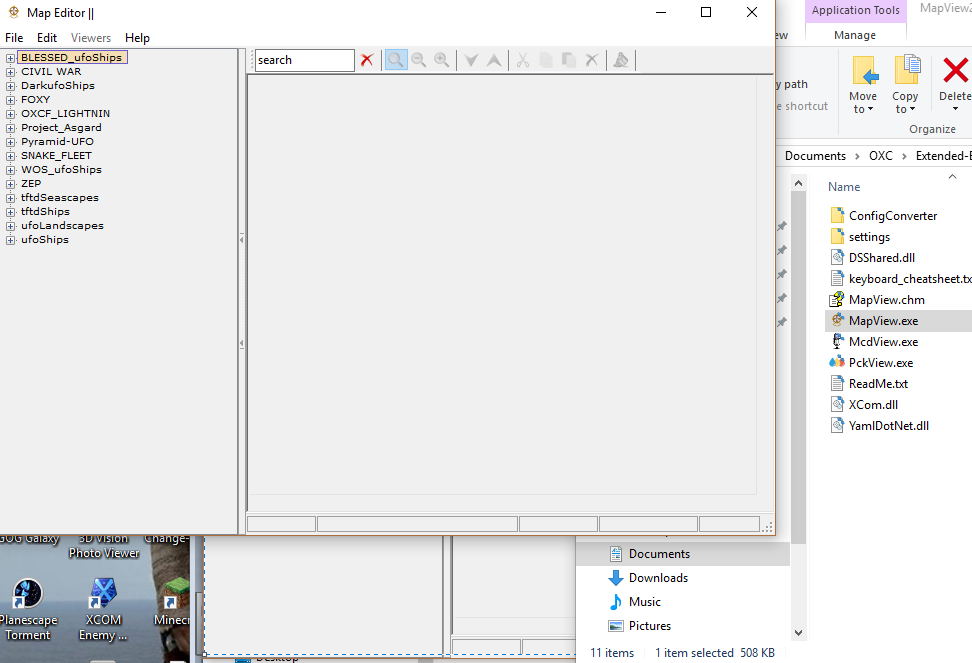 Now you have Mapview2 installed, if you selected one of the map sets it automatically created for you & then select one of the mapblock within that set, you should see an extra 3 windows open up on screen, if you cant see them ( or eventually close one by accident) you can turn these back on from the main window by using the drop down menu under  "Viewers".

The General Window on Mapview has 4 sections

​1: Main Window - Has the "Map List" tree and large graphic window to show what a map looks like
2: Top View - Is where you place the Tiles onto the Map block, there is 4 sections - make sure you place objects in correct one ( for example Don't place a table in the "Floor" slot.
3: TileView - shows what tiles are loaded for use within the selected map block
4: RmpView -Shows the Spawn points for the map you have currently selected 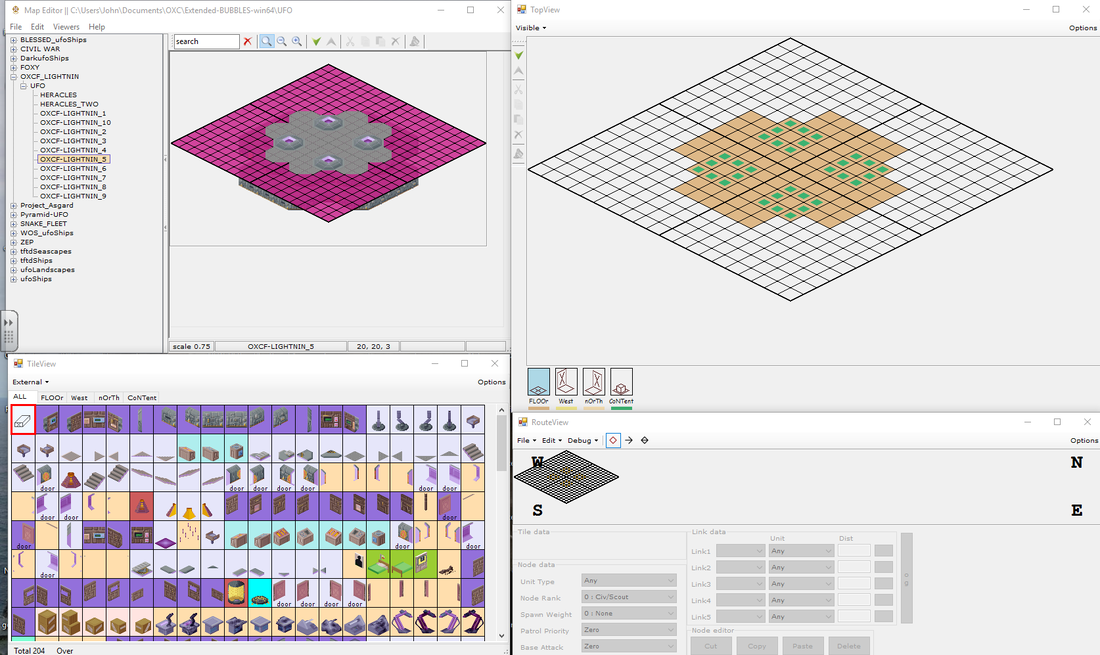 *Another point of interest is the TOTAL number at the bottom of this window, this shows how many Tiles you currently have available to use on the mapblock, If this number exceeds 256 items, you will have data that can not be used in game ( there are ways to overcome this limit but we can cover them later on also).

*Double clicking any Tile will open a pop-up window showing the stats of each object, this is helpful if you already understand the MCDdata however if you are a new user, this info will make a lot more sense to you if you use another program to read this ( like PCKEDIT or PCKVIEW).

*The final point i wish to mention is in the External dropdown, here you can get Mapview2 to quickly open up some of the other common modding tools to allow you to correct any issues you find quickly when creatign a set, this is such a simple feature but it does come in handy when your making your own MCDSETS and you notice something is set wrong.

​ Edit a Map Block
To add/remove Tiles to a map block , first select which map block you wish to change. Then select a item using a Left click on your mouse in the Tileview window . Now Switch back to the TopView window, there are four boxes on the bottom of this screen ( Floor, West ,North and Content) Select which location you will be adding the desired tile to, then Pick the location on the map grid you where you want to place it, then Right Clicking on your mouse will add it that location.

To delete a item from  TopView window you can select the delete option from the Tileview window OR double right click on a item you wish to clear ( Make sure you select what content you are selecting again , its impossible to delete the floor tile if you still have content selected). Once your map is setup the way you desire you are ready to move onto Spawn Nodes

On the RmpView Window and Right click where you want your first node to be placed. It is important to note that these nodes are used to spawn Units and allow them to walk between map blocks. Once you have placed a few Nodes Link them together ( See Link1 -5 on the image) and to each edge of the battle map so Aliens can walk onto the map from all directions. At this point you can specify what units will use this node, can anyone walk along this path , maybe you just want flying units to use it, the choice is yours . NOTE: If you want an Alien to move from NODE A to NODE B , then you need to make sure the 2 Nodes are linked, Once the alien is at NODE B, If you want him to walk back to NODE A , you need a separate link on Node B back to Node A as otherwise you are only setting up a one way path.